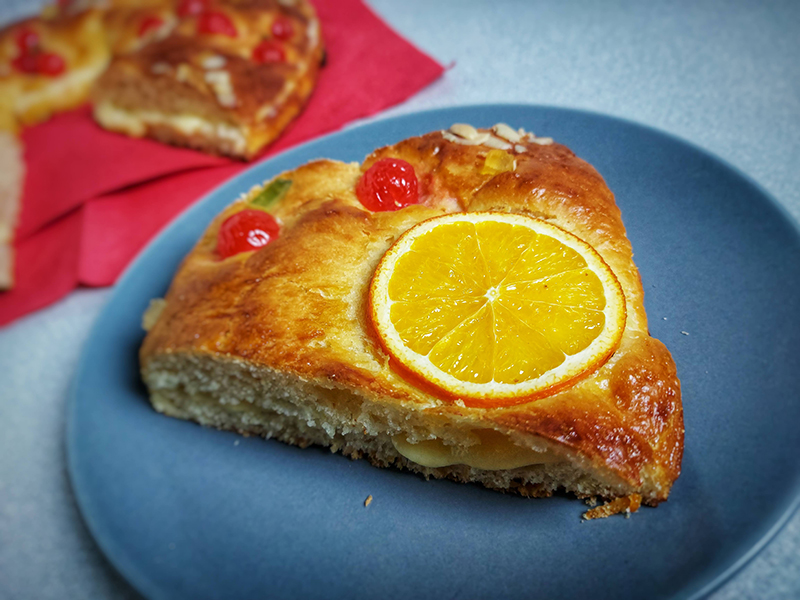 At first glance, Roscón de Reyes looks like a mixture of a huge bagel and a cake. And it is not so far from reality. It has a hole in the middle like a bagel has and is often filled like a cake. Brilliant!

What is Roscón de Reyes

The tradition behind Roscón de Reyes

On the evening of 5th January, festive lights all over Spain light up to celebrate the arriving of the Three Wise Men. They arrive on camels and wonderful carriages and give gifts to the people celebrating them on the streets.

In the evening, before going to bed, children put a little milk and cake on a table for the tired Three Wise Men, and a little water for their camels. At night the Wise Men hide the gifts in the shoes of the children. In Spain, according to tradition, people do not give each other presents at Christmas, but at Epiphany.

On the morning of 6th January, the family gets up, the kids unwrap the presents, and traditionally eat Roscón de Reyes for breakfast. Part of the tradition is to bake a little toy and a bean in the dough. Whoever finds the toy will be the king of the house that day. And who finds the bean has to pay the price of the cake!

About the cake itself

There is orange blossom water in it which I am a fan of lately. I have already written a few words about orange blossom water here. Then let’s see what else is in it. Yeast and butter that will make the cake really soft. And a small amount of orange zest to achieve a pleasant orange flavor.

It is very easy to make, but it is a long time before the dough rises properly. But you won’t really have anything to do with it. You mix the dough, you let it rest. You shape it, you let it rest again. Then you just quickly decorate, bake and that’s all. You will have a lot of free time between the methods so don’t be shocked when you see that it takes 4 hours to prepare 🙂

At first glance, Roscón de Reyes looks like a mixture of a huge bagel and a cake. And it is not so far from reality. It has a hole in the middle like a bagel has and is often filled like a cake. Brilliant!
Print Recipe Pin Recipe
Total Time 4 hrs 15 mins
Course Dessert
Cuisine Mediterranean
Servings 10 slices
Calories 262 kcal

Additional filling of your choice, see notes below the recipe

THIS POST MAY CONTAIN AFFILIATE SALES LINK. IT MEANS THAT IF YOU BUY THROUGH MY LINKS I MAY EARN COMMISSION AT NO COST TO YOU. FOR MORE INFORMATION CLICK HERE.

Roscón de Reyes can be served with or without filling. They are most often filled with whipped cream. I originally wanted that too, but unfortunately my standing mixer broke down, so I had to look for another solution.

Finally I filled the larger cake with vanilla pudding and the small ones with cream flavored pudding. I put 1-1 tablespoons of orange blossom water in both, and the result was incredible! I highly recommend to try them with pudding filling! You can store the filled Roscón de Reyes in the fridge for about 4 days.

The calorie amount of 262 kcal/slice is without any filling. If you make pudding filling with sugar, the calories will be higher, 348 kcal/slice. But it’s definitely worth it!!!

If you don’t like the idea of pudding as a filling, try whipped cream! Put 1-2 teaspoons of shifted icing sugar and 0.5-1 tablespoon of orange blossom water into the whipped cream. It will be very tasty, you will love it!

The dough can be mixed perfectly with a standing mixer, but also with a spatula and by hand. I’ve tried all of these, so do it in a way that is easier for you.

Yeast dough needs a warmer temperature to be able to rise high. With me it often happens that the kitchen is not warm enough. With you too? Then heat up the oven to 25 degrees Celsius, put the covered dough in it, and take it out after 2 hours. It will perfectly rise.

The larger cake fitted nicely in my 38×33 centimetres baking sheet. I thought the three little ones would have enough space too, but by the end of the baking they were stuck together. Which is not a problem anyway because they can be easily separated from each other. Only then did they not become as beautiful as I would have liked.

It happens sometimes with everybody, next time I will put two cakes on that baking tray. So if you have the same size as mine, be careful and leave enough space between two cakes! I left about 3-4 centimetres between them but next time I will leave a minimum of 7-8.

If you make one cake from this amount of dough, feel free to use orange slices. But if you would like to make smaller cakes, you would rather slice small clementines. It will be much nicer than putting huge orange slices on top.

I baked this awesome cake again in mid-January, but in a slightly different way. I made it for a friend of mine who neglects sugar and white flour as much as possible from his diet and he is trying to reduce his calorie intake. So I made some changes in the recipe a bit and the result was as awesome as the original.

I was wondering if I should put the pictures here or just write the changes I made. Because it didn’t really work out the way I planned, so to speak, I messed it up a bit. 🙂 Compared to what I expected from myself. Because otherwise it became delicious and beautiful. But in the end, I decided to have the picture here as well, so the story is complete. Here is the Roscón de Reyes which has no hole in the middle:

Okay, that’s not a tragedy, but again, I didn’t do the shaping process well and didn’t leave enough space for the dough to rise. But I’ve really memorized this now, so next time it will be as perfect as it has to be.

Let’s take a closer look at what I changed in the basic recipe. The methods are the same and almost all the ingredients are the same, so now I’ll just mention what I replaced.

The first change was that instead of 350g flour I used 150g plain flour mixed with 200g whole wheat flour. Mix them at the beginning and you can continue the process with the flour-mix. Both the yeast and the dough will rise in the same way as I described in the recipe.

Secondly, I used skimmed milk instead of whole milk. I decided to use skimmed milk because there will be fewer calories in the cake.

The third thing I changed was the amount of sugar I put in the cake. You will need 25g sugar that you mix with the yeast, the flour-mix and the lukewarm skimmed milk. And, substitute the remaining 75g sugar with 75g erythritol. This is a very cool sweetener, I use it often. It will work well when you use in for cooking, baking or just put into the morning coffee. It contains zero calories! Erythritol is a very good choice if you want to reduce your sugar intake.

The fourth change I made is that I replaced the butter with low fat margarine. It is very easy to work with margarine because it is soft and it can be kneaded well with flour. And, low-fat margarine has a third as many calories as butter! There are people who prefer butter, there are people who prefer margarine. I clearly don’t put my votes down to either side, but use them alternately. Sometimes margarine, sometimes butter, I think this is the best solution.

I used 40g candied oranges that I kneaded into the dough before I let it rise for two hours. This is just a little bit of extra orange touch for the cake. Brilliant! Sprinkle the top of the cake with candied oranges before baking, that’s really tasty!

In the filling I used the same vanilla pudding but I cooked it with erythritol instead of sugar.

Do you remember how many calories a slice of Roscón de Reyes contains according to the traditional recipe? It was 262 kcal/slice, without filling and 348 kcal/slice with pudding filling. With these changes, I reduced the calories to 252 kcal/slice, WITH FILLING! Not bad 🙂 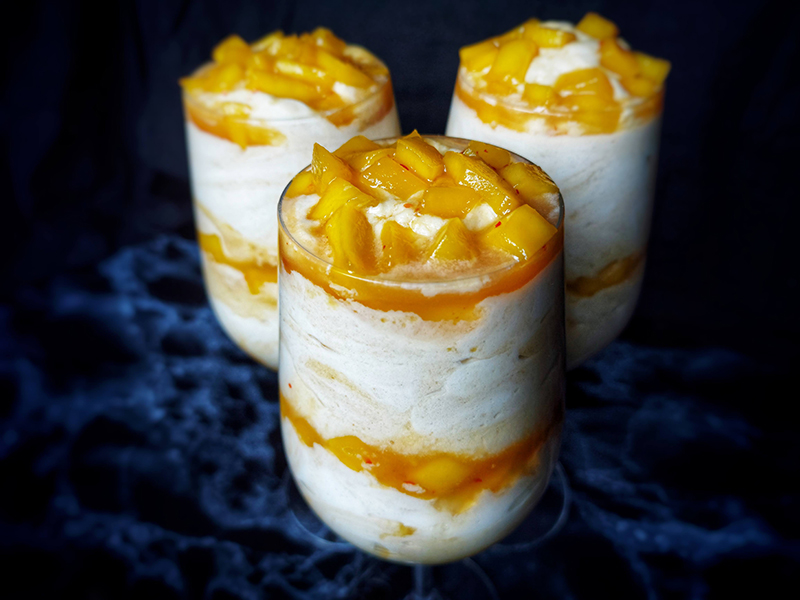 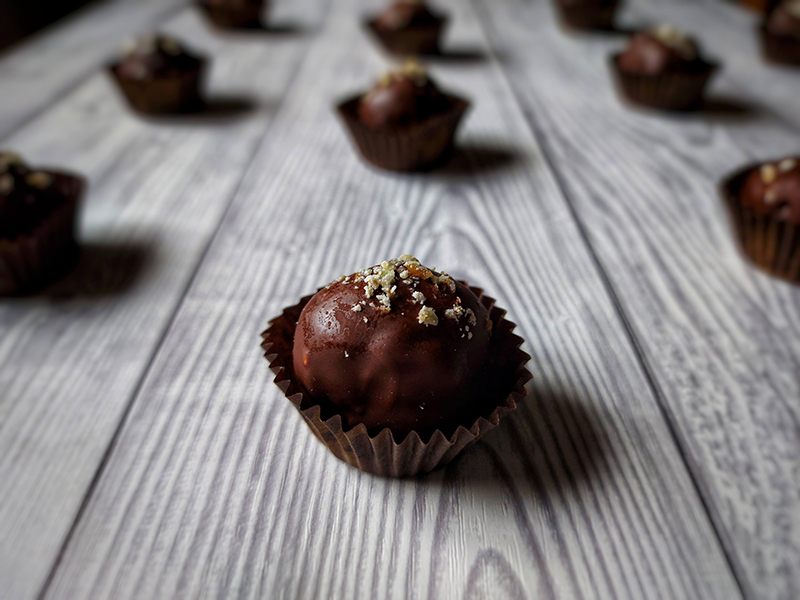 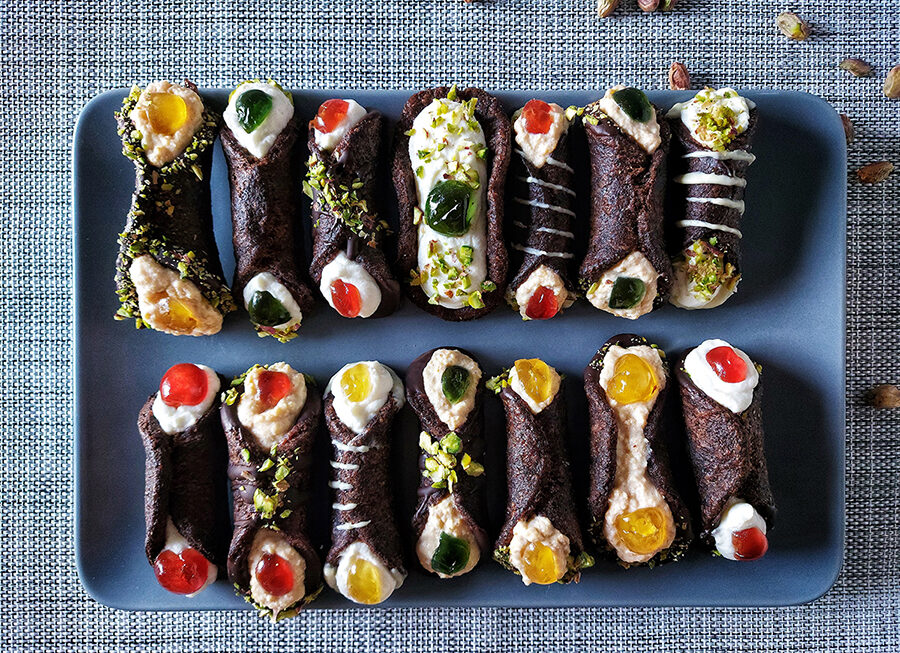