Lecsó, the ratatouille of Hungary? 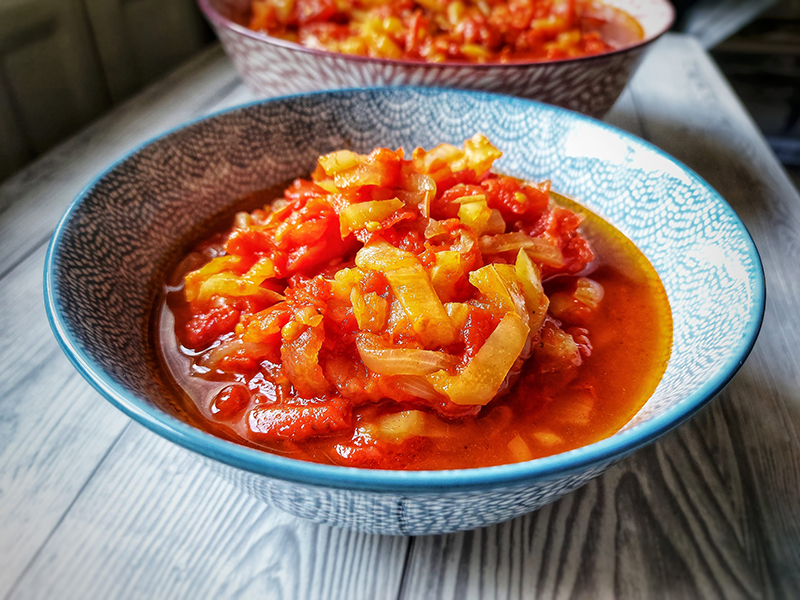 Lecsó is one of the traditional Hungarian dishes. It is typically a summer dish, as it is made from really ripe tomatoes, sweet (or hot) yellow peppers, onions, with salt and pepper. Hearty and cheap food that is very easy to prepare. As it has no specific rules, you can’t make a mistake while making it!

Lecsó is usually translated in English as ratatouille. In my opinion, it is wrong, as there is very little similarity between the two dishes. It’s just that there is no meat in either.

Ratatouille, for example, contains eggplant and zucchini, while lecsó does not.

But what is perhaps a bigger difference between the two dishes is that ratatouille is made in the oven and the lecsó on the stove. So we’re talking about two completely different foods.

The lecsó tradition in Hungary

In Hungary, making lecsó is a real traditional end-of-summer activity. At the end of every summer, Hungarian women cook a generous amount of this delicacy. They store it in mason jars so that in winter they can just take it off the pantry shelf and make the family happy with it. It is hearty, easy to prepare, cheap and perfect dish for preservation because it can be stored for years.
If you’re interested in how you can store summer in your pantry in the form of lecsó, I have good news: I’ll dedicate a separate blog post to it soon.
Lecsó can be consumed not only on its own, but also as a seasoning in several traditional Hungarian dishes. Let’s take a look.

The basic recipe only includes vegetables that are thoroughly cooked, slightly seasoned. It can be consumed on its own, with bread that can be used to wipe the sauce off the plate. 🙂

You can serve it with pasta (e.g. tarhonya, which is a typically Central European pasta, often called egg barley, but other types are also good for it such as penne) or rice. Mix it up and a very nutritious food will be on your plate.

It can also be enriched with sausage and eggs. The sausage is added to the food at the beginning of the process and the egg at the end. But it doesn’t matter how. I detail these variations below the recipe in the bonus tips section! So by the time you read this all the way through, you’re already learning at least 5 new recipes! 🙂
It can also be used in the preparation of stews. Due to the long cooking time of the meat, lecsó will cook into a thick, creamy sauce.

If we’re already at the sauce: the density of lecsó depends on the variety of tomato. I really like it if lecsó has a lot of sauce, which is also dense, so I tend to choose a tomato that has thick meat. In general, elongated, harder varieties are very good for this purpose, e.g., San Marzano. If you want to leave the sauce a little thinner, then any kind of tomato will be fine.

There’s no accounting for taste

I describe the recipe the way we love it. I usually put a little hot pepper in it, but of course it’s not mandatory at all. With the exception of hot peppers, I suggest you make it first as detailed. Then the next time you make lecsó, you will be able to change the proportions of the ingredients to your own taste.

The good thing about this recipe is that you can change it however you want! If you think the amount of onion is too much, don’t put so much in it. If you think there are too few peppers in it, add a little more! Trust me, you won’t spoil it.

This is also the case in Hungary: there’s no accounting for taste. If you walk down the street of any of our wonderful little villages and knock on every house in search of the perfect lecsó recipe, you certainly won’t hear the same recipe twice. 🙂 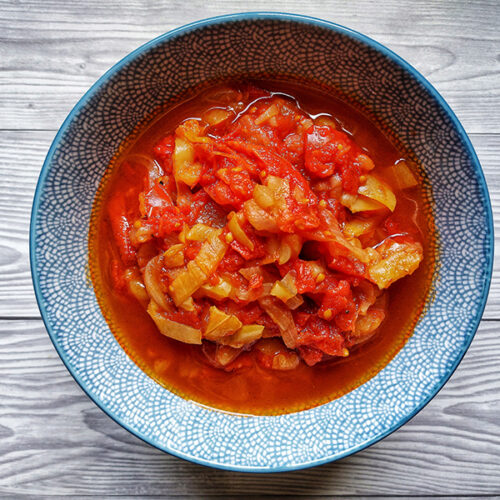 It is typically a summer dish, as it is made from really ripe tomatoes, sweet (or hot) yellow peppers, onions, with salt and pepper. Hearty and cheap food that is very easy to prepare. As it has no specific rules, you can't make a mistake while making it!
Print Recipe Pin Recipe
Total Time 1 hr 15 mins
Course Main Course
Cuisine Hungarian
Servings 4
Calories 190 kcal

THIS POST MAY CONTAIN AFFILIATE SALES LINK. IT MEANS THAT IF YOU BUY THROUGH MY LINKS I MAY EARN COMMISSION AT NO COST TO YOU. FOR MORE INFORMATION CLICK HERE.

Lecsó with sausage: Add 150 grams of sausage to the basic recipe. Start the recipe like this: Put the sliced sausage on the hot oil. Cook for about ten minutes until some of the fat is cooked out from it. From here, the basic recipe continues, put the onions on the sausage, and then the other ingredients as described in the recipe above.

Lecsó with eggs/1: Cook the lecsó as described in the recipe. When done, break some eggs into a small bowl and beat up a little with a fork. Usually count on one egg per person (but of course you can put more into it). Pour the eggs into the lecsó, mix thoroughly and cook for another 6-7 minutes until the egg pieces are cooked through. The result will be as if you have mixed in a smaller portion of scrambled eggs. Very, very delicious.

Lecsó with eggs/2: I left my favorite at the end of the list. My mom cooked like that when we were kids. 🙂 Cook the lecsó according to the recipe, but by adding extra 2 tomatoes to it, to make it a little thinner by the end. When it is ready, reduce the heat to low and gently beat in the eggs, one by one. Don’t stir! Cook under a lid for about 10-15 minutes, then stir gently. If the eggs are properly cooked in the lecsó, they are done. Enjoy!

One thought on “Lecsó, the ratatouille of Hungary?” 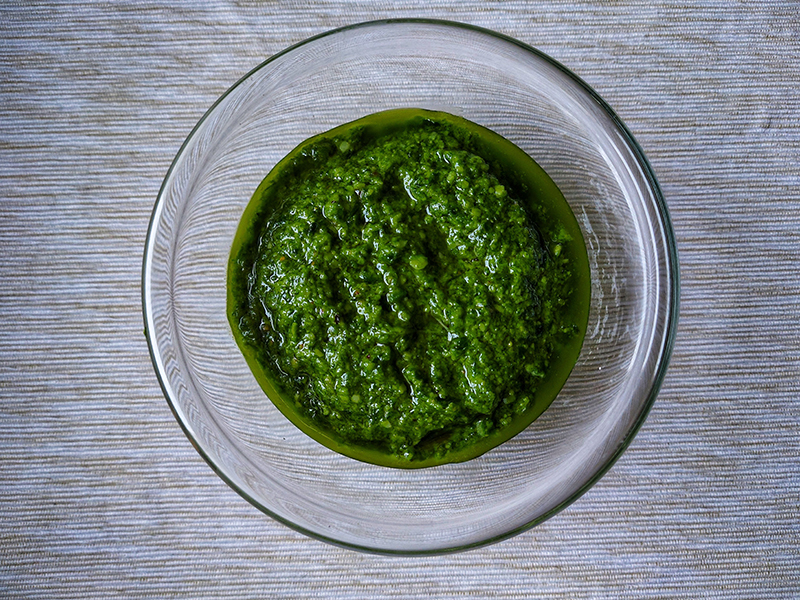